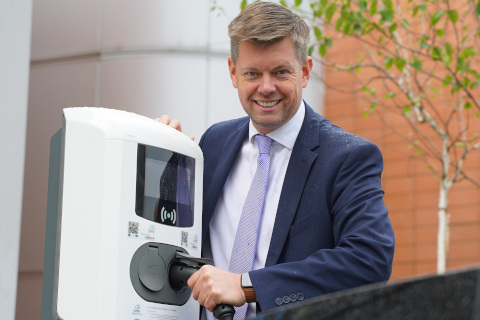 Government scrappage scheme of £6,000 could prove to be ‘game changer’ to EV

Automotive industry expert Fraser Brown is calling upon motor dealerships to lobby the government to adopt a ‘game-changing’ £6,000 scrappage scheme that would ensure a widescale switch to electric vehicles.

The managing director of specialist sales consultancy MotorVise Automotive, which works with hundreds of car dealerships throughout the UK, says such a measure would stimulate the auto industry and make a significant contribution to the government’s 2050 net-zero emission target.

He is also urging chancellor Rishi Sunak and business secretary Alok Sharma to support the proposal and consider increasing the scrappage rate for diesel vehicles.

Fraser, who prior to establishing MotorVise Automotive in Colburn, North Yorkshire, had more than 16 years’ experience in the automotive industry, believes a £6,000 scrappage scheme on petrol and diesel vehicles will narrow the price gap to a such an extent that it is no longer a major factor.

He said: “Now is the time for car dealerships across the UK to make sure the government understands just how important a scrappage scheme such as this would be in creating a crucial tipping point in terms of electric vehicle sales.

“I would urge it to go further and look seriously at increasing the scrappage payment for diesels, which emit more noxious gases and particulates, to ensure they disappear from our roads at a more rapid rate.

“Any increase in the volumes of electric vehicles sold will also lead to greater competition and economies of scale that would ensure a further fall in price.

“This would be a game-changer not only for the automotive industry, which is a vital part of the UK economy, but for our health and the future of the planet.

“One of the biggest barriers to the widespread adoption of electric vehicles has been the price, partly due to the development costs and the cost of battery manufacture and production.

“While the gap between petrol or diesels and electric has narrowed in recent years, it is still a deterrent to most motorists – even considering the much lower running costs.

“A scrappage scheme would help bridge that price gap and make owning an electric vehicle a sensible and logical move.”